Learn how to best give feedback to others

“Even in conditions of high trust, it can be hard to give or receive honest feedback about behavior or the job being performed.  This can be especially true for team leaders. If you are a team leader, your role will likely supersede your personal characteristics in the workplace.  Even in casual team environments where friendships exist. As a team leader, your reaction to feedback--including your emotional response--is likely to have an impact on team members and ‘set the tone’ for the team as a whole.  For example, if you welcome feedback from all team members and thank them, they will learn by watching you. It is especially difficult for people with less power or in subordinate positions to provide candid feedback, especially if you, as a team leader have the ability to impact their careers.  Ensuring they feel safe receiving and giving feedback is essential. 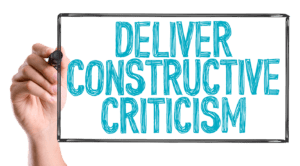 “The single most important factor in encouraging candid feedback is establishing an atmosphere in which disagreement and constructive criticism are welcomed.  To establish such an atmosphere of psychological safety, team members must have a positive experience when they voice disagreement with the team leader or other team members.  If your response to another team member’s expression of differences is defensiveness, rebuttal, ridicule, punishment, or exclusion--whether in private or public--team members will be unlikely to speak up, even when asked.  However, if you meet team members’ efforts to voice disagreement with both receptivity and appreciation, you will begin to build a base from which others can voice their opinions--both positive and negative--to improve overall team function.  While it may be impossible to get to the point of absolute honesty and frankness, it is possible to move further in that direction.

“There are a number of appropriate approaches for giving feedback, one of which is called the Situation, Behavior, Impact, Future (SBIF) model [below]...For receiving feedback the rules are simple.  Greet the input with a sincere ‘Thank-you’ and if you do not fully understand the comments someone is making, ask some questions. Whatever you do, there is no need to respond defensively or to explain yourself.  The ‘Thank-you’ is adequate.

“In recent years, ‘360-degree evaluations’ have become a popular managerial and self-evaluation tool, particularly in circumstances where the ability to work well together is important.  In a 360-degree evaluation, each person being evaluated receives feedback from peers, supervisors, and subordinates. To increase the likelihood of truthful responses, the feedback from peers and subordinates is kept anonymous.

“When giving positive or constructive feedback, the goal is to be as specific as possible so the recipient knows exactly what they did well or can learn how to do better next time.  The following approach can help you deliver specific feedback.